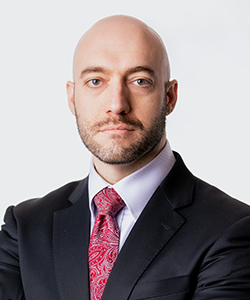 Alexander Loftus has resolved a wide range of significant cases through mediation, arbitration, and trial across all sectors of commercial litigation, including breach of contract, fraud, professional malpractice, business divorce, and shareholder disputes. Alex specializes in litigating business, intellectual property, commercial, employment, and class action cases and is passionate about fighting for the little guy in a failed business transaction and he prides his practice on being the righter of wrongs.

Alexander is a distinguished member of the Illinois State Bar Association, Illinois Trial Lawyer’s Association and the Small Business Advisory Counsel. From 2013-2022, Alexander has been designated a Rising Star by Law and Politics and the publishers of the Chicago Magazine, which is a decoration given to only 2.5% of attorneys in the State of Illinois. In 2013 Alexander was esteemed “Superb” by AVVO which is an unbiased physician and attorney rating agency and was designated in the Top 40 Trial Lawyers under 40 by the National Trial Lawyers Association.

Most recently Alexander was Chair of the Commercial Litigation Group at Stoltmann Law Offices where he was 80% plaintiffs’ side contingent/alternative fee litigation and international arbitration where he handled a variety of civil litigation cases from inception to appeal. Some of his most notable cases delivered the following:

Prior to leading up the Commerical Litigation Group at Stoltmann Law Offices. Alexander was a trial attorney at Voelker Litigation Group. Some of numerous successes while there are:

Alexander grew up in a small town in southern Wisconsin and loves taking his kids fishing there in the summers. He attended college in Saint Paul, Minnesota and Washington, D.C where he studied Political Science and was a member of Pi Sigma Alpha (national political science honor society). While studying at American University Alexander held his first legal position as an investigator for Mental Health Division of Public Defender Service for the District of Columbia. Prior to graduating from DePaul University College of Law with honors, he worked for the general counsel of 3M, obtained additional legal experience at US Bank and has years of high stakes contingent fee legal experience Fichera & Miller, P.C.