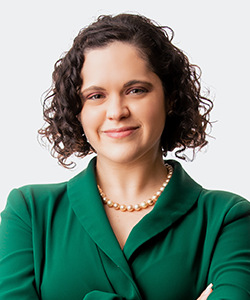 Gail Schnitzer Eisenberg focuses her practice on employees’ rights. She approaches each matter with a pragmatic, empathetic lens rooted in legal analysis. Gail assists clients in a range of employment disputes related to race, gender, and other forms of workplace discrimination, harassment, and retaliation. Gail has experience with all phases of litigation and administrative proceedings as well as employment contracts, training, handbooks, and severance agreements.

The American Bar Association named Gail to its 2021 Top 40 Lawyers On the Rise list, which recognizes ABA young lawyer members who exemplify a broad range of high achievement, innovation, vision, leadership, and legal and community service. Leading Lawyers has named Gail an Emerging Lawyer in Employment Law, and Super Lawyers named Gail as an Illinois Super Lawyers Rising Star in Employment Litigation, one of less than 2.5% of Illinois attorneys under the age of 40 given that distinction, every year since 2017. She had previously been named a Rising Star in Class Action litigation. Gail was also named to the 2015 Chicago Jewish 36 Under 36 List by the Jewish United Fund.

Gail is active in the community. In 2021, the residents of New Trier Township in the northern suburbs of Chicago elected Gail Township Supervisor after completing a four-year term as trustee, in which position she helps oversees the communities social safety net and social programs. Gail also currently sits on the Administrative and Government Affairs Committees of the Jewish United Fund, co-chairs the Legislative Committee of the Decalogue Society of Lawyers, serves on the Quality Jobs Council for Women Employed, on her school district’s Community Review Community, on her synagogue’s board, and as a Girl Scout Troop Leader, and on the Triage Cancer Legal Advisory Council. She is passionate about fighting prematurity and was selected to the inaugural class of Gretchen Carlson March of Dimes Advocacy Fellows in 2018 and now serves on the March of Dimes’ North Suburban Leadership Council and Illinois Government Affairs Committee.

Before joining Loftus and Eisenberg, Gail practiced employees’ civil rights law at Stowell & Friedman, Ltd., which was named the top law firm for employee rights and race discrimination matters by the National Law Journal. Before that, Gail worked as a Managing Associate at Dentons’ Litigation and Dispute Resolution practice, where she focused on class action defense and other complex litigation primarily in the insurance, financial services, gaming, and media industries. Gail emphasizes pro bono service volunteering legal services with the Domestic Violence Legal Clinic, ACLU of Illinois’ Judicial Bypass Coordination Project, the National Immigrant Justice Center, and Equip for Equality. She also has worked directly with children through the Girl Scouts Legal Track and the Constitutional Rights Foundation's Lawyers in the Classroom Project.

Gail began her legal career as a Staff Law Clerk at the U.S. Court of Appeals for the Seventh Circuit, where she worked on criminal and civil appeals as well as requests for leave to appeal the denial of petitions for habeas corpus. Gail also taught Appellate Advocacy at Loyola University Chicago School of Law.

During law school, Gail served as a judicial extern for the Hon. Joan Humphrey Lefkow for the Northern District of Illinois and as a Civil Procedure teaching assistant for Prof. Ron Allen. She also served as a Legal Extern at the United States Attorney's Office, Northern District of Illinois, and as a Civil Appeals Division Law Clerk at the Office of the Attorney General of Illinois Lisa Madigan. Gail represented clients in immigration proceedings as a part of the Bluhm Legal Clinic's Children and Family Justice Center at Northwestern Law, served as the Symposium Editor of the Journal of Law & Social Policy, and on the Miner Moot Court Board. Prior to attending law school, Gail served as a Civic Leadership Fellow at the Anti-Defamation League of Greater Chicago/Upper Midwest Region.

Presentations
Publications
24-hr Potential Client Intake
Practice Areas
Client Reviews
★★★★★
"Thank you, and again, THANK YOU. Gail has been our advocate through this all (and very patient with us and our many questions) and we are so SO GRATEFUL." Age and Disability Discrimination Client
★★★★★
"How do you say thanks to someone who receives her rewards daily, THANKS! Gail is the genuine article." Race Discrimination Client
View More
Submit a Law Firm Client Review