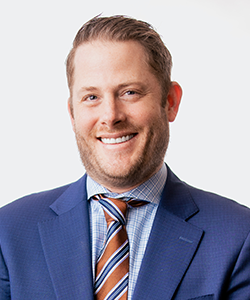 Jeff has gained an extensive amount of experience advocating on behalf of plaintiff clients who have suffered considerable financial damages and other issues because of the negligence or wrongdoing of others. In addition to plaintiff representation, he also defends the rights and interests of physicians, lawyers and other licensed professionals accused of unscrupulous or unlawful practices, and he has achieved remarkable success helping his clients find the favorable outcomes they seek as efficiently and cost-effectively as possible.

To that end, Jeff is well-versed in arbitration, mediation and other alternative dispute resolution techniques, and he has recovered millions of dollars in settlements and verdicts for his clients both inside and outside the courtroom. Among his most notable successes, he helped mediate a settlement for a company in Wisconsin facing $10 million in claims involving patent prosecutions, and successfully defended a claim brought against an uninsured attorney involving more than $4 million in claimed damages by way of trial.

Jeff is a distinguished member of the Illinois Trial Lawyers Association and American Association for Justice. Jeff was designated a Rising Star by Law and Politics and the publishers of the Chicago Magazine from 2013 through 2017 and a Super Lawyer from 2018-2022. In 2013, Jeff was esteemed "Superb" by AVVO which is an unbiased physician and attorney rating agency. In 2015 and 2016 Jeff was recognized as an "Emerging Lawyer" and from 2017 through now has been recognized as a "Leading Lawyer" by his peers based on surveys conducted by Law Bulletin Media. Jeff has earned an AV-Preeminent peer review rating from Martindale-Hubbell as well as an AV-Preeminent judicial rating.

Jeff has resolved a legal malpractice matter in excess of $10,000,000 involving complex intellectual property matters and obtained a judgment of $2,550,377 for a professional athlete in an action involving a failed purchase of a professional sports franchise. He successfully defended an NBA player in the 7th Circuit Court of Appeals from a claim of more than $1,200,000 brought by that player's former agent for breach of the player-agent agreement.

Jeff is originally from Middleton, Wisconsin and now lives in Hinsdale with his wife and two children.

Expert Retentions
Publications and Seminars
Certifications
Volunteer / Pro Bono Experience
Professional Memberships
Awards and Honors
Practice Areas
Client Reviews
★★★★★
"Alexander is my attorney who has been thorough, aggressive, focused, and a credit to the legal profession. Five months ago Alex was thrown into my case due to a tragedy by my previous lawyer. He was given few records, learned the circumstances, and devoted his attention so that this week he stood before a judge to try my case. Well done Alexander!" Allan Zwirn
★★★★★
"Alex is an outstanding lawyer well knowledgeable and very professional I do not usually recommend lawyers to family members or friends but I definitely would recommend Alex thanks for a great job well done." Winston, R.
View More
Submit a Law Firm Client Review