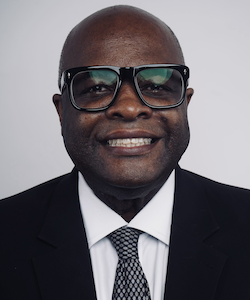 Philip Dalmage was born in London, England as the proud son of Jamaican immigrants during the Windrush generation. His family later settled in Westport, Connecticut where he would attend school, excelling in both sports and academics. He obtained a scholarship to Marquette University where received a BA in Criminal Justice, later earning his J.D. from what is now the University of Illinois, Chicago School of Law.

After completing law school and passing the bar in both New York and Illinois, he spent ten years as an ASA in the Cook County State’s Attorney’s Office. After growing weary from the systemic inadequacy and injustice he witnessed as a prosecutor he shifted his focus towards community building via work in public service and local government. In 2005 he was appointed as the Associate Director of the Illinois Department of Financial and Professional Regulations. He then moved to the Illinois Department of Children and Family Services as Special Counsel to the Guardianship and Advocacy Commission, later being promoted to Chief Administrative Law Judge, a position he would hold for five years. In 2013 he moved to the Illinois Department of Human Services, where he served as both Associate Director to the Community & Youth Development Program, and Director of the Business Enterprise Program.

In 2018 Governor Bruce Rauner appointed Phil to his cabinet as the Executive Director of the Illinois Human Rights Commission. The Commission is dedicated to promoting freedom from unlawful discrimination as defined by the Illinois Human Right Act. The Act forbids discrimination based on: sex, age, race, color, religion, arrest record, marital status, sexual orientation, physical and mental disability, national origin, and countless other protected categories. In his first six months at the Commission Phil cleared an astounding five-year backlog of cases regarding human right violations. He continued to serve under Governor J.B. Pritzker through the summer of 2020.

He is also the proud father of two extraordinary children. His son Owen is an undergraduate at Columbia College Chicago where he studies video game design, and his daughter Mahalia is an aspiring neurosurgeon currently enrolled at the University of Chicago’s Pritzker School of Medicine. At present he splits his time between Chicago, Illinois and Denver, Colorado where his wife Brenda works as an Executive Director in IDD Advocacy and Services.

A staunch advocate for migrants, Black and Indigenous People of Color, and various other marginalized populations, Phil has spent the better part of the last three decades striving for a more equitable Illinois.